.....and all the universe was quiet, there was no light, I reached out to find something to hold onto, but only found void.

I knew that to move would destroy the quiet - this awesome quiet. To disturb it would bring down the wrath of the universe. Prone, I hid my head in my arms and waited....

How long I waited I don't know. I slowly became conscience, of a haunting, wild music -  perfect in harmony. It was a coming song - I knew. I understood that the waiting was over, and the happening was here.

The song came closer, crescendoing. I looked up - straining to discover this orchestra. I understood that it had existed for always, yet never been heard by mortals.

A deep rich light in the east shown out on a sparkling, gleaming orchestra of instruments. I cannot describe them. The instruments were held by dancing, graceful spectrum's of color - and I knew that they were alive.

I knew too that the song had been of always - and would ever be - unending. And the light increased, yet it too had always been - and time passed - a time that always was, and never existed.

The light was moving, dancing in graceful patterns of exquisite design. I not only heard music but I began to understand it. Some was light and airy, some sober, somber and dark , and some so rich it was out of the range of hearing, I could only feel it.

Then I began to hear the story - the story of the universe. I heard of the mighty King and Creator.


Then, all the music and it's players, and the dancing universe parted. The king was coming - and I saw His form. I knew Him as King, Master, Lord, Creator, Almighty - and I was afraid.....

How could I face Him. To know Him was past bearing and to not know Him unbearable. He was in all, and through all, and the music was in Him, yet also a telling of Him.

I fell on my face to the earth and behold, found it too was singing - a deep and mellow song - but in it's dignified, measured tones, was such a throb of unrestrained joy. And I understood. It was alive and preparing, repairing, making ready for her master. The light of the dancing stars and celestial bodies revealed earth - as it was meant to be, unscathed by all that had been inflicted on her. The earth stood as I knew it had been when created. I could not comprehend the perfection I saw, the unmarred beauty. And I saw for the first time that all mankind was there.

The faces of all were filled with awe, and all were on their knees. But the faces of some radiated a glory and joy that illuminated all their being. The faces of others however, were dark, mottled with terror - all color had fled leaving their faces filled with dread.

But, what of others. The King was here. All else disappeared. There was only Him. Then I was prone before Him. I looked up in awe and fear,  into His eyes.    In that brief fleeting glance I saw all the pain and sorrow my acts in life had wrought. I saw the sin, the evil of which I had been guilty - and my repentance, and...............
and oh.....

There was more, much more, more than I could bear seeing - more than I can bear to tell. I covered my eyes and clutched the hem of His robe and wept. I knew I would die of sorrow. I knew I could not live apart from Him, but I knew I could not even dare to look on Him. I was petrification, a stench on the universe. How could I have presumed to look upon Him. My spirit melted within me..... all was black.

Then, in awe, I felt warm tears on my forehead - tender hands lifted me up. He, who created the universe, embraced me. He washed me with His tears - and His tears cleansed me. I turned my head up to look at Him but a hand covered my eyes, but this blackness was warm and secure. He let me know my time was not yet. I must return to my own place for now. 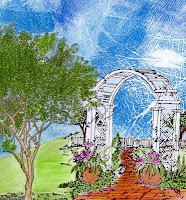 And then I was alone.

I cannot remember the music, I can't even remember one chord. I have looked so long, and I can't find those colors. But, at times there is a glimpse that stops me in holy wonder.

Though I cannot remember, I know I will know Him when the time of my release comes. I long for Him and wait for Him. Oh the glory of knowing him.   Knowing He is there, and one day I will know Him fully. It makes the waiting bearable.
Posted by Galilee's Page at 3:32 PM